I had a weird (and unpleasant) experience this week, which I want to share with you. On Tuesday, I wasn’t really feeling good, rather sad. My mother came and told me it was the 20th anniversary of my grandmother passing. And as the day was passing by, my sadness only got worse, I just wanted to be alone and cry my heart out… When I finally went to bed, I could not sleep, my thoughts were so dark, I thought my whole life was a mess and what was I going to do with it? I still managed to fall asleep at some point, and luckily, the day after, the dark cloud hanging above my head was gone and I could just go back to being my normal self. But obviously that made me think and wonder whether those feelings were actually mine. I thought about my grandmother, I thought about a special configuration of stars, I was really puzzled with the whole thing. I don’t know what it was at the end (I thought about a few more different explanations!), but I know it wasn’t mine; it was too out of sync with me.

I think that, when we have a lot of empathy (we don’t necessarily have to be hypersensitive), it is very easy to feel overwhelmed by (negative) feelings originating from other people. And how about the energy-sucking people who can only complain all the time, can they bring you down with them too? How about the big disastrous events on the planet, can you feel those (and the conscious collective sadness) too? If yes, can you find a way to stay in your own vibration?

This brings me to the following: the necessity for introspection and time alone, to go back inside to find yourself back. And of course, meditation is a good exercise for that, but you can also read a good book or do a DIY (my personal favorite) with mindfulness and find yourself back this way as well. You can also go and walk in nature, listen to good music, whatever works for you in the moment.

How about you? Do you sometimes feel something that might not be yours? 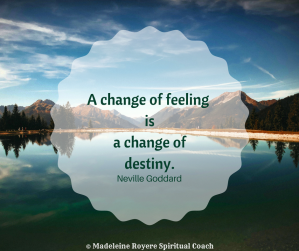 Take good care of yourself and enjoy life!

I wish you a great week.

First of all, I would like to apologize for not having written for 2 weeks, it was school holidays here and my planning had to adapt… Moreover, I saw it as an experiment for me: am I going to feel guilty and how is that feeling going to develop?

I think guilt is a very common feeling in our culture and I don’t know anybody who does not feel guilty from time to time (and I think mothers are the worst ;-)). But to me, there are 2 types of guilt: the first, dictated by our education (in which religion also plays a part), where we position ourselves as kids getting told off by our parents for having done something “wrong” in their eyes. The second is the one that we feel ourselves, independently from education, as adults having their own judgment on good and bad and what we should do or not do (lying and betrayal are perfect examples where everyone has to decide for themselves, based on their own situation…).

I remember when I stopped smoking, years ago. A few months later, I woke up after a dream during which I had smoked again, and the feeling of guilt woke me up, like, no, I haven’t done that, have I? It was my own decision to stop smoking and nobody had pushed me to do it. Still, I was really nearly in panic because of that dream!

I think that, as much as we would like to get rid of that, more often than not, we are torn by this feeling, as if we were still young kids waiting to be scolded and punished. I am not saying that we should never feel guilty; obviously we should know what we do now and act consequently! But I would like tot suggest that we ask ourselves the question when that happens: is this guilt feeling coming from me or from my parents/family/education? Because when it’s the latter, we might want to learn to release it, to free ourselves from it, so we can be fully ourselves instead of still fitting the parental mould.

So, if you are curious about how not writing felt to me… I would say: deliciously guilty! It evolved of course during those 2 weeks, and I knew I would come back to you after this break, but I made sure I was aware of it, and I wanted to enjoy it as well, to fully embrace it, because it was fully mine J.

So, tell me, are you feeling guilty for anything right now? And is it really yours? 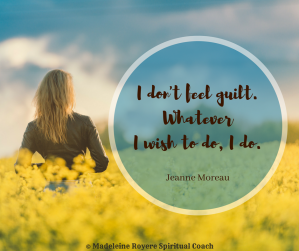 Take good care of yourself and enjoy life!

I wish you a great week.